I entered Colombia in a brain fog from a night of sporadic 20-minute naps totaling two hours of sleep. I flew overnight from Seattle to Medellin, across four flights and attempts at sleep constantly interrupted by tilting sideways, neck strain, or a pilot announcing air turbulence at 3:00 am as if any of the passengers cared.

Upon disembarking in Colombia, we got a groggy second wind and were away again via taxi to El Poblado, a fancy neighborhood of Medellin popular with nightlife and tourists. Our Airbnb sat on top of three tiny restaurants that were the incarnate definition of “hole in the wall” establishments, though each had good food and friendly proprietors. We found out each night how loud El Poblado could become from the boom and reverberation of concerts and revelry nearby, all pounding through the single pane windows and all their air gaps until 2:00 am.

Wandering the city streets was the first order of business. Hungry for a Colombian meal, we ate traditional local foods at popular restaurant Mondongo’s. Filled up, we headed over to Santa Fe Mall for a rainbow display of huge faux flower-covered butterflies flapping their wings in rhythm above the people. This was a part of Medellin’s biggest celebration: the annual Festival of Flowers.
The streets were even more alive than usual because of the festival. Street performers of all kinds included mimes, break dancers, fire spinners, clowns, and impromptu jam bands. They appeared and disappeared throughout the night, choosing congregation points and then moving on to entertain others. 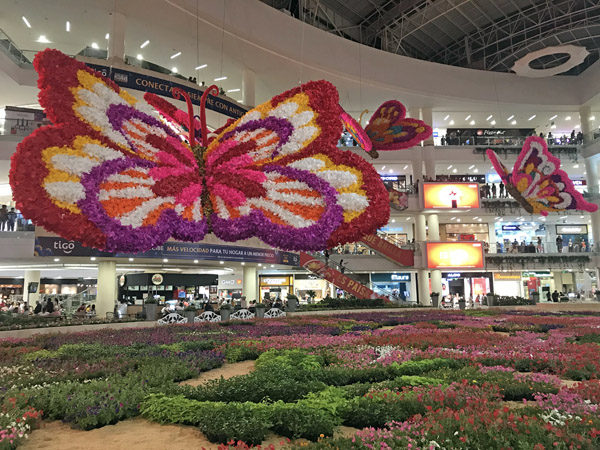 In El Poblado, packed tables with surrounding chairs flowed out of the cafes, bars, clubs, and restaurants, all full with the sound of talk and laughter. Street vendors offered meats, fried foods, and natural juices from exotic fruits not available back home. Community energy was in the air.

The next morning, we walked to Medellin’s nearby Metro station, part of the city’s impressive public transportation and its overall progressive transformation over the past twenty years. The lawless and violent times of Pablo Escobar’s reign was history, not current reality. The light rail, busses, taxis, and unofficial Uber app taxis were all modern and efficient for locals and visitors.
Once at the station, we met up with gracious, friendly, and fun Manu and her father Rene. Many had been an au pair with some of our Seattle friends, and a long-distance connection was created beforehand. We were very glad for it. They and their entire family were warm, welcoming, and a very special part of our trip.

Manu and Rene escorted us through the Metro system and got us onto the linked Metrocable. The Metrocable was an ingenious solution to public transportation needs in Medellin. The city was shaped like the inside of a partially flat-bottomed ship’s hull, with the city’s main attractions and neighborhoods at the bottom of the valley and tenuous 3-4 story stacked homes cascading up the increasingly steep mountain sides of town.

Getting up among the homes and businesses along the valley’s upper reaches can be so steep that homes are only reached by trudging up blocks of stairways and dirt paths. The topography and its dense beehive of packed together, irregularly shaped homes made bus and light rail routes unfeasible. Their solution: the lower public transportation connects to aerial trams pulled along on cables high above ramshackle rusted metal and tile roofs below. Public transportation becomes an amusement park ride, and it solves a problem in a city where most people do not own a car while also living up steep mountainsides.

The Metrocable tram ascended beyond the end of roads as they steepened too much, and further over the maze of concrete block homes attached to the steep slopes. Some of the homes were triangular to take over an unused irregularly shaped spot. Others were multi-level with multiple families. Almost all had rough concrete work and appeared uncertain in their stability on the side of an inclined bluff. Apparently, few fell over or slid down a hillside, which was surprising when seeing them.

Eventually, the homes dispersed to wider spaced homes on mini farmettes, reachable only by dirt paths. Then, just trees. At that point, we were in the air above the protected landscape of Parque Arvi. The park is filled with verdant green trees and plants, populated by animals and birds. We explored its small farmers’ market and crafts market and checked out the views. Then we were again going over and then down back to the hubbub of Medellin city.

Karen was in character as both a foodie and a freshly grown food aficionado. She has always loved wandering through densely packed bazaars searching for something unique and interesting. So, the Minorista market (Plaza Minorista José María Villa) was high up her priority list, and Manu led the way.

The Minorista was a sprawling food, fruit, fish, and crafts market within inner Medellin, all under cover of large buildings on multiple levels. Inside was a maze of vendors and farmers hawking their goods, hoping to attract our attention more than the stand next up the row.

Our experiences and palettes were considerably expanded as we went on a fruit tour of edibles that we had never heard of, yet alone eaten. We ate fruits whose rind cracked open like an egg. Another we slurped and gulped a mucous-like central mass of sweetness and seeds. Swallow all of it! Another was stringy inside and squishy outside. One I had to suck the pulp off each seed. Some were sweet, some tart, many were new flavors.

After more exploring and a delicious fish soup, we all hugged and said a temporary goodbye until we convened again that coming Sunday. Manu and Rene went home while we got parade tickets and Karen did some shopping.

Coming “home” to El Poblado from the city center at after-work rush hour was a hilarious jaunt. Our Uber taxi driver was as aggressive yet poised as was needed to get through an incredibly congested yet flowing mass of cars, buses, motorcycles, and pedestrians. In the small lane space between the sides of every car and bus was at least one lane-splitting motorcycle, and sometimes two nearly side by side. Or a motorcycle would hop on the sidewalk and weave through pedestrians for a brief advantage over other bigger vehicles. Traffic lights were lightly obeyed. Horns honked constantly in all directions. Yet it all moved beyond gridlock. Most American drivers would likely have been uncomfortable just being a passenger and would have had no comprehension how to make progress in the tightly interconnected chain of vehicles moving in all directions. I loved the orchestrated pandemonium!

Later in the evening, when the traffic was just crowded and not ridiculously crowded, stop lights became a whole show of their own. As soon as a light turned red and cars stopped to wait, performers or service providers of all types would walk out into their one-minute opportunity.

An industrious break dancer would perform in the crosswalk in front of the paused cars, and then adroitly time his performance to end with 10 seconds to walk between the cars and see if anyone would hand out a tip. Same with the fire spinners, who would light up their equipment and give some razzle dazzle to those waiting for a green light. I especially appreciated the technique of snack food sellers: they would walk between the parked cars and place their snacks directly on the windshield in front of each of the first dozen drivers, who then had 30 seconds to stare at this delicious treat one foot in front of their face and make a decision…

After a shopping stop at Premium Plaza, we Uber’d over to Plaza Botero. This was quite a lively, hopping place! Interspersed within a wide urban concrete plaza was an outdoor “museum” dedicated to large scale figurative bronze sculptures by Colombian sculptor Fernando Botero Angulo. Interspersed among those sculptures were people, lots of types and activities of people.
Standing up along the wall of the looming church were prostitutes young and old, petite and voluptuous, shy and aggressive, natural and transvestite. Performers sang on guitars, acted goofy for children, converged together for jam sessions. Couples wandered for an evening out. Craftspeople and vendors sold goods from fold-up tables. Food and drink vendors offered small meals from their rolling carts. 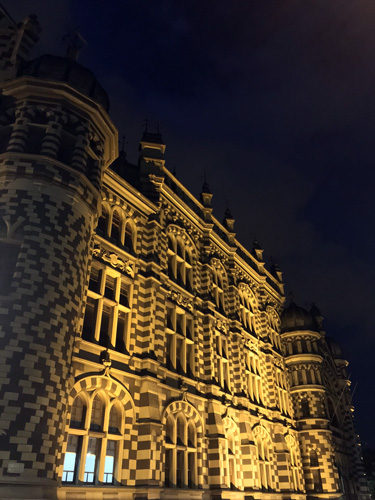 As night came on, the sculptures took on a new reflective look under the city lights. Locals walked with purpose, while visitors posed in funny positions for pictures with sculptures, grabbing the occasional bronze penis. 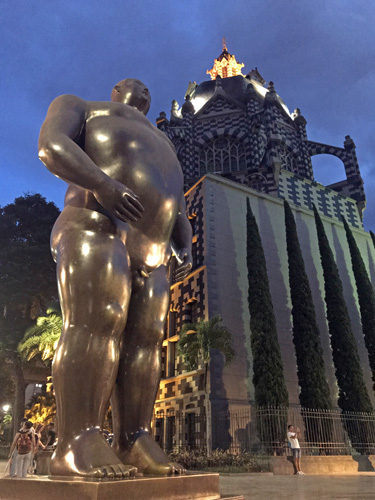 In Medellin, we later moved from the trendy El Poblado neighborhood to the nicely appointed Laureles neighborhood, staying a couple nights in a 17th floor penthouse apartment. Upon arrival by bus, we were entertained by an energetic band performing for several thousand appreciative dancing fans. A group of friendly Colombians noticed Karen swaying in place with some basic salsa moves, so they enthusiastically took us into their group, danced with us, put hats on our heads, and took pictures with the visiting gringos.

The streets of Laureles were alive with more celebrations for the Flower Festival. Bands played from stages while other “bands” sat on crates in front of closed storefronts. Performers emerged. Every bar and restaurant was overflowing onto the sidewalks. Food and drink as plentiful, including the huge “aphrodisiac” hormiga ants that were a crunchy, tasty snack.
On to a part of the city with a notorious past, we found a street guide to take us around infamous Comuna 13. This neighborhood had the highest murder rate in the world during the drug-driven reign of Pablo Escobar a few decades ago. Since Colombia’s renaissance after his death, Comuna 13 had transformed with beautiful wall murals, craftspeople, and outdoor escalators that helped move people up and down the community’s steep hillside. It was a fun walk, made better by the detail a local guide could provide. 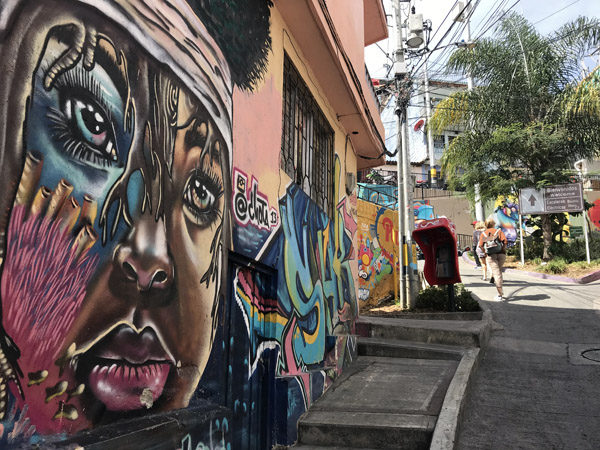 The Festival of Flowers culminated in a celebration parade that wound through downtown Medellin as a huge unifying event for citizens. The focus was on farmers who spent many months growing and creating 6-foot diameter circular structures fancifully decorated with perfect, vibrant flowers. The farmers competed in multiple judged categories, some emphasizing artistry or three dimensionality while others emphasized social messages or Colombian concepts. Men and women labored in the heat carrying up to 200-pound loads on their backs, shoulders, and heads. We saw a few 70-year-old women plodding along while some big 30-year-old men were needing to set down their loads and get celebratory support from the crowd to continue. 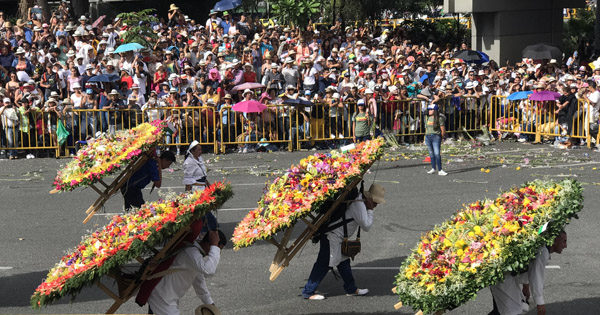 In addition to an ongoing stream of flower sculptures across many categories, there were military and police groups, helicopter flyovers, antique cars, dogs, wildly costumed performers, and more. We heard afterwards that 2 military men fell to their deaths from a rope dangling out of a military helicopter; they were above and below the Colombian flag on the rope when it broke from the top.

We pre-purchased tickets in the bleachers, which was better for viewing and seating comfort than the general open areas packed with people mostly all at the same level. The length and sporadic presentation was unusual by American norms: the whole parade was 5 hours long, though it was probably only 2 hours of actual combined sporadic activity interspersed with long waits. Seeing it with our Colombian friends Manu and her boyfriend made it all much more enjoyable and understandable than if we had watched it on our own.  Medellin spirit and friendliness!