Trek to The Lost City of Colombia: Ciudad Perdida

Across our entire cross-Colombia excursion, my overall favorite and completely different experience was the jungle trek to Ciudad Perdida, The Lost City.

To get near Ciudad Perdida, The Lost City, we stopped over for a visit to Santa Marta.  Santa Marta was a smaller, somewhat rundown city with some history and nice walking areas along the beach.  However, it did not have nearly as much to offer a visitor as the other towns throughout Colombia we visited. There were historical signs at key locations, which added some depth to our informal walking tours.  Many Colombians said they preferred Santa Marta over more well-known and visited Cartagena, though our experience was the opposite.

On an early morning, we gathered at the Expotur expedition guide office in Santa Marta with other trekkers going to Ciudad Perdida in our group, among other groups who were also converging there.  Enthusiastic and helpful English translator Juan Carlos was the main cohesive leader of the trip, though the expedition was officially led by the more knowledgeable and experienced Spanish-speaking-only guide Cesar.  We were also accompanied by assistant guide Samir and cook Daniel.  Among our hikers were us Americans with Dutch, Germans, Italians, Irish, English, and Austrian all mixed together and speaking the traveler’s language of English.

The trek through mountainous jungle trails to Ciudad Perdida was 30 miles round trip, generally accomplished in 4 or 5 days (we chose 4).  Every place along the entire length was on steep terrain.  If the trail was temporarily level, it was only because the trail was cutting across a slope.  High heat and humidity made the trek difficult for some in the group to fully complete.  Enterprising locals could provide motorcycle assistance in the early half of the trails and mule assistance in the later half. 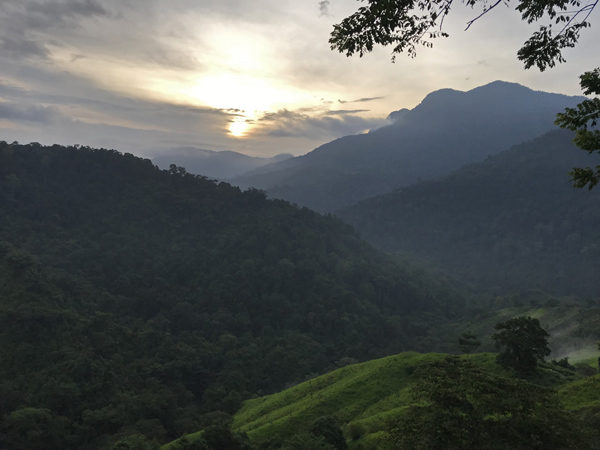 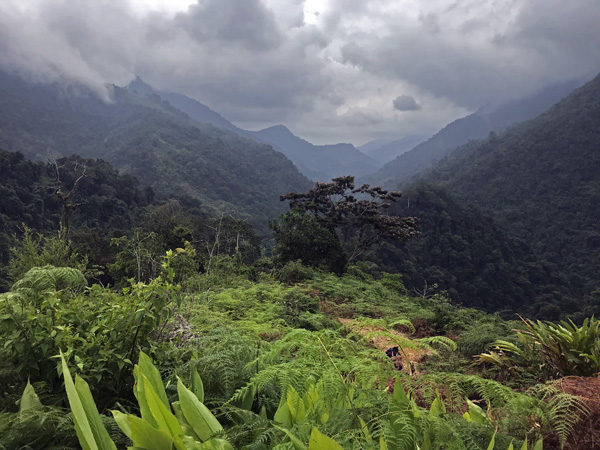 Access through the indigenous land to The Lost City was strictly controlled.  Only approved trekking guides were allowed, and the guides paid the locals so they also benefit from the tourism that traverses through their lands and heritage.  Local farmers and indigenous tribes also provided a few places for overnight accommodation of trekkers.  There were mostly large open side, thatched roof structures with mosquito netting around hammocks or basic bunk beds for sleeping.  All had simple toilets, cold water showers, and even mostly solar powered electrical outlets and lights.  So, you could charge up your gizmos.  Other enterprising locals sold natural fruit juices, coconuts, fruits, and an occasional beer or soda to passerby trekkers drenched in sweat. 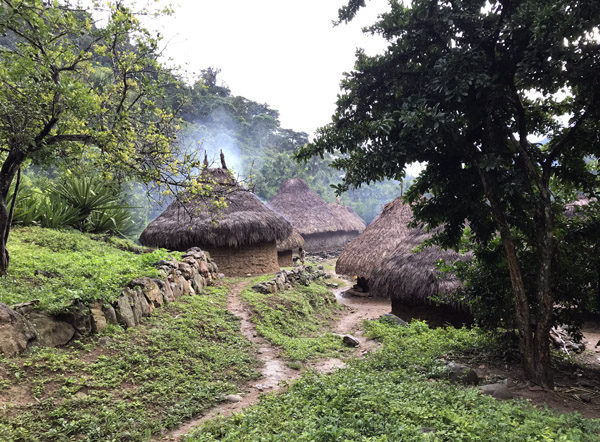 The trek route was out and back, passing indigenous tribe villages, farmer pastures, open areas where coca (for cocaine) was previously grown just a few decades ago, cascading rivers, and jungles of exotic trees, vines, huge bamboo stands, and dangling fruits or flowers.  All of this was explained by Cesar and translated to everyone by Carlos. 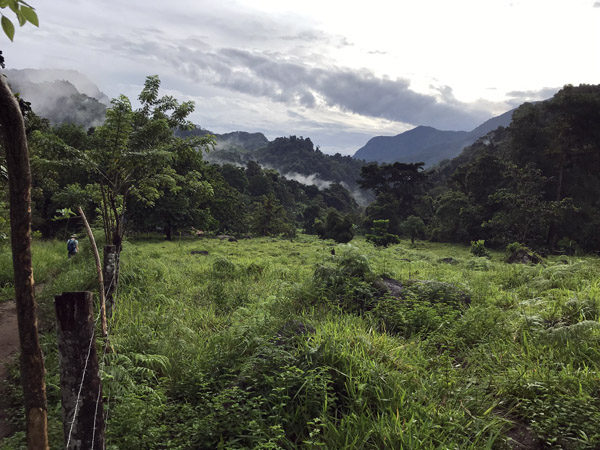 Prior coca field by trail

The hiking got a bit more adventurous with rain.  Some steep slopes became slippery clay muck.  One rain was epic.  The roar of its volume could be heard as a hard-defined edge advancing across the jungle mountainside toward us.  The experience was then like standing under a garden hose, literally.  We were immediately drenched to the skin and our clothes, boots, and socks never dried out afterwards in the humid jungle. 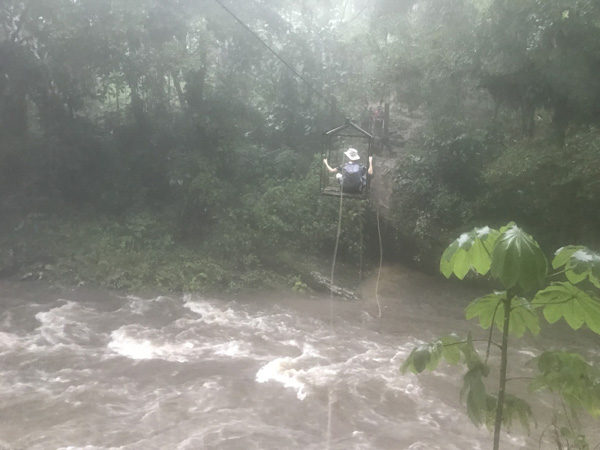 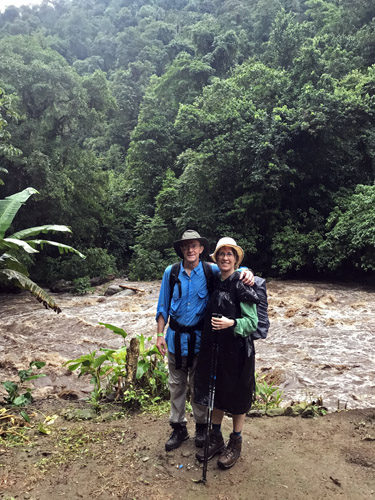 Soaked from rain, at edge of raging river

At one point that normally required a river crossing, the river level rose so dangerously high and fast that we were instead pulled across high above on a cable in a rusted metal box with rotted wood floorboards.  Later, a small trickle of a stream, normally just skipped over, became a torrential waterfall and river.  To get across that, a rope was strung across the torrent and we hung on tight to get to the other side.  Carlos had experienced plenty of rain in his many years of guiding there, yet it was never previously that extreme.

Venturing into The Lost City itself was a terrific experience, with its history, limited number of people allowed there, remote jungle seclusion, and open visibility due to maintenance by onsite workers who kept the encroaching jungle whacked back.

After ascending the first 1200 rough-hewn stone steps, we came upon the first lower terraces that originally had homes on top and buried elders with gold treasure below.  The gold treasure was before looters, though even that part still exists in some other ancient buried jungle villages.  A series of walls, stairs, circular terraces, and pathways led up the mountainside that was once a center of authority, commerce, gathering, homes, and religion.  Ciudad Perdida was only abandoned after so many people there started dying and the place was labelled as cursed for centuries.  The actual source of the curse were diseases brought by the Spaniards in the 1500s.  The city was always known by local indigenous people since then, though not discovered by Westernized people until the 1970s when dangerous and aggressive looters found and despoiled parts of it. 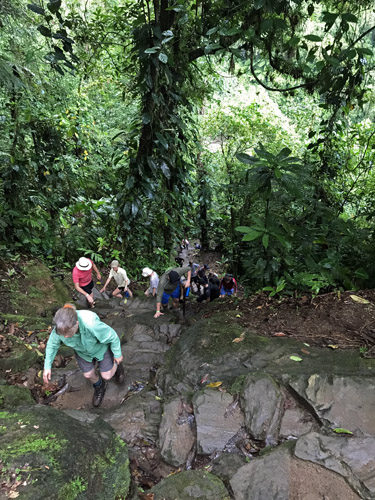 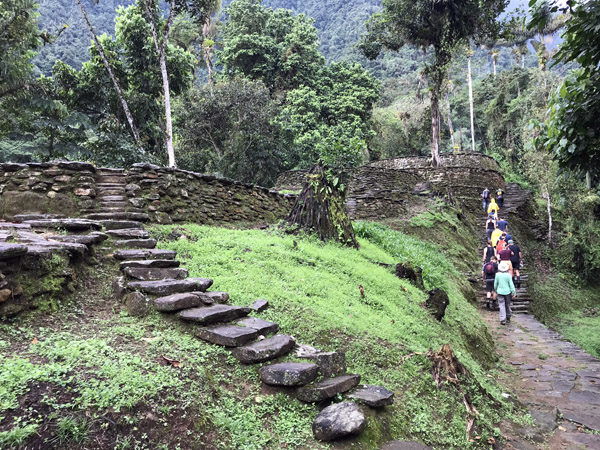 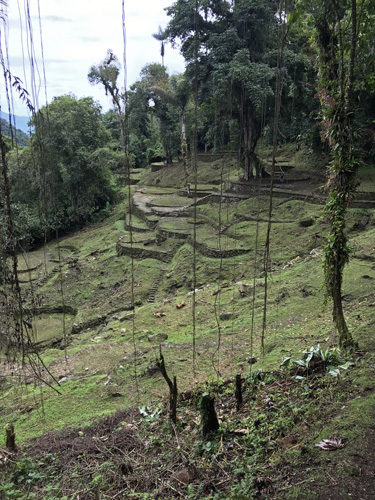 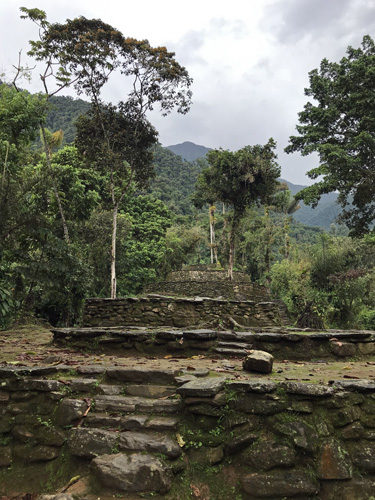 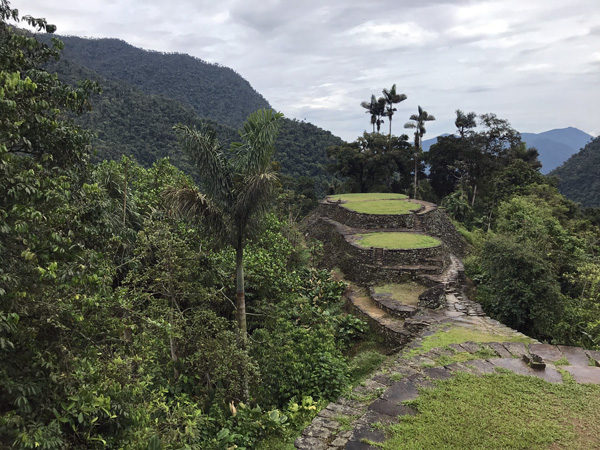 The hustle and bustle of long ago was palpable while walking the royal road up to the highest levels where tribal leaders lived.  At those elevations, the views spread out to lower levels of the community and the valley beyond.  Circumnavigating the community’s main trail system felt even more real as we walked by the indigenous descendants of The Lost City’s ancestors.