Jardin beckoned to us: a small, colorful, beautiful town cradled by surrounding green mountains.  We arrived after a 4-hour drive from Medellin.  Even just getting there was fun.

Alex, our driver, took us from the paved urban roads of Medellin to the bumpy, rocky, rutted, dusty roads among small mountain towns.  Tiny econobox Kia and Chevy cars bounced along on roadways where a typical US driver would justify needing to buy a Jeep.  Occasionally, in the roughest spots, there would be a single man in the middle of the road with a shovel and bandanna over his nose and mouth as a dust filter.  He was fighting a perpetual battle to smooth the road and keep it passable.  Dust in the air was so thick that one time we almost ran head-on into an oncoming bus, right before swerving away into the dirt fog.

Homes along the way were a range from rough construction red concrete block shacks to single level ranch style homes with manicured lawns and colorful landscaping.  Some poorer homes were built in a ramshackle manner entirely within the 10-foot buffer between the road edge at front and a cliff at back.  Some would have tiny sheds with food and drink stands out in the middle of nowhere, trying to attract a thirsty passerby.

Everything changed upon entering Jardin.  Still rustic in places, yet mostly organized with colorfully painted, well kept side-by-side attached homes lining a walkable grid of streets.  Jardin is well known for its colors in homes, flowers, stores, and even in the furniture of public meeting places. 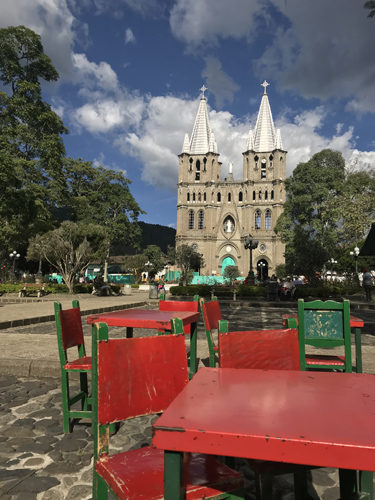 After getting settled in with the best and most welcoming Airbnb host we have yet met, we explored the town on foot.  The central square, watched over by a looming Catholic church of volcanic rock architectural design and unusual blue interior, was the central meeting spot for locals.  Neighbors gathered at the many benches and brightly painted chairs by tables that overflowed around the entire plaza.  Beer was served from the local bars, and food was picked up from the street vendors’ carts.  On the weekends, proud farmer men came into town on small horses with the most unusual gait I had ever seen.  Hooves and legs pumped up high and down again in speedy succession, like pistons in an engine. 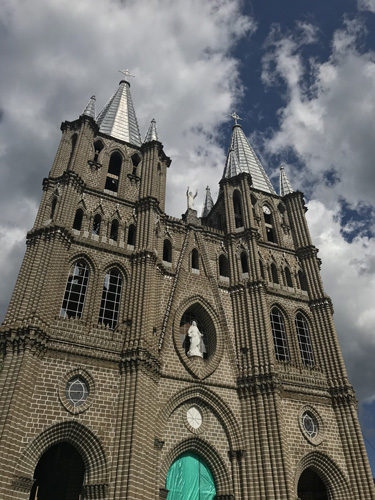 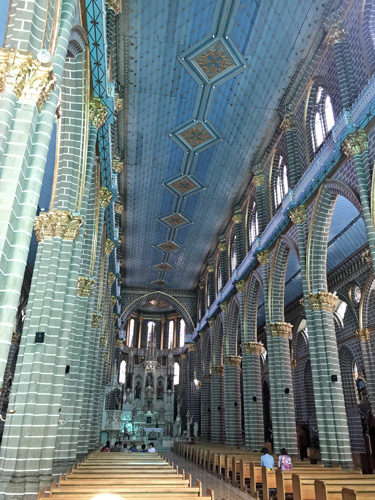 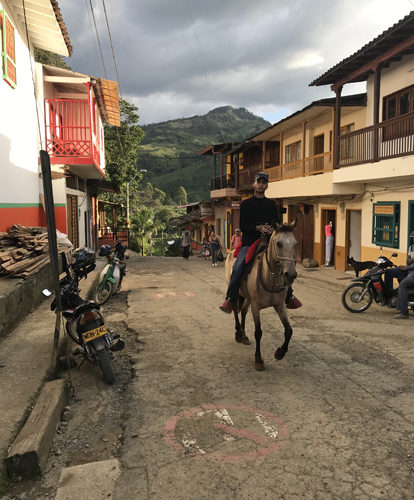 After exploring the many tiny shops and ornate homes along side streets, we ventured up into the surrounding mountainsides that have even more to offer.  Taking a dirt road out of the town’s northwest corner led us to an old trout farm built directly in the path of a flowing river.  The river provided an oxygenated fresh water source for the fishponds as well as waterwheel power to press sugar cane stalks before their juices were refined down into solid panela sugar blocks.  The restaurant there was good, and fish entrees were obviously quite fresh.  The whole operation was lorded over by a large white-haired man who sat at a table and was periodically consulted for direction by staff of the multiple businesses underway there. Further up the road was a sweeping elevated viewpoint across Jardin, to round out the excursion in that direction. 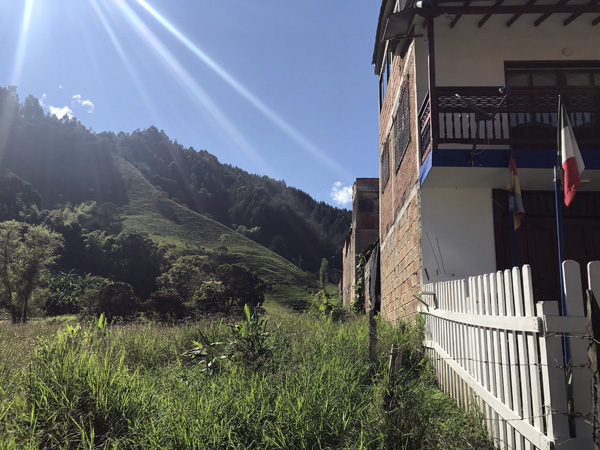 Building and hills on outskirts of northwest Jardin 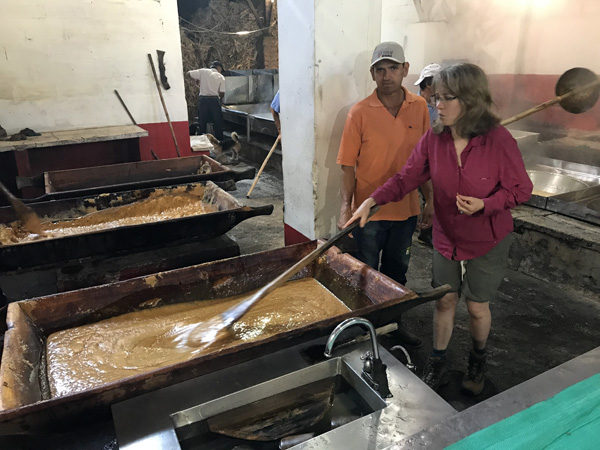 On the other south side of the valley, a large loop can be formed via rutted roads, trails, and a suspended aerial tram.  Along the way were pretty homes, a flowing river with pools for swimming, a tunnel with bats that was created by a man with engineering and drilling experience, and quiet forest views.  We stopped at a specific roadside café as its only guests for a corn milk drink and a wonderfully sweet serenade by the elder father on his guitar.  The songs were only by special request, which we knew to do.  The loop ended up the hillside above town and a lush river canyon.  This last section was traversed by a rickety old aerial tram that fit four people and a box of Coke bottles to be recycled in town. 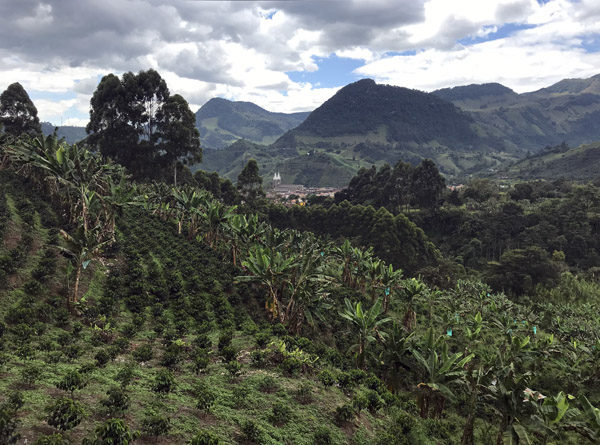 Coffee and banana plantation on outskirts of southeast Jardin 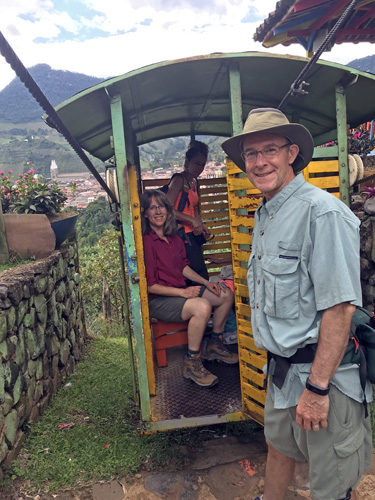 Near this return point, and after going down a dirt road to an unsigned steep dirt path, the Cocks of the Rock can be seen in only the early morning or late afternoon.  The brilliantly colored orange and red male birds return then for some social time together with cacauphonous sounds and head bobbing.  The special spot is privately owned and treated as a private park, with an entrance fee and the owner wandering around to greet people or answer questions. 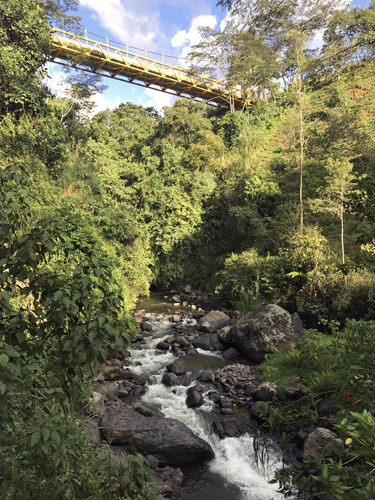 Calle 9 bridge over river by Jardin

Jardin was my favorite town of this entire cross-Colombia excursion.