Much to Report at Newspaper Rock

Newspaper Rock State Historic Monument is one of the largest collections of Native American petroglyphs anywhere, and also one of the easiest to access. Located just a hundred feet from a parking area in southwest Utah, you should definitely stop by if you are interested in Native American history that is well preserved.

The petroglyphs were chiseled out of the black “desert varnish” surface of a large smooth sandstone wall, starting 2000 years ago by people from the Anglo, Anasazi, Archaic, Fremont, Navajo, and Pueblo cultures. Over 650 petroglyphs can be seen, with a wide range of depictions spanning human, animal, symbols, and conspiracy theorists would say there is an alien or two. 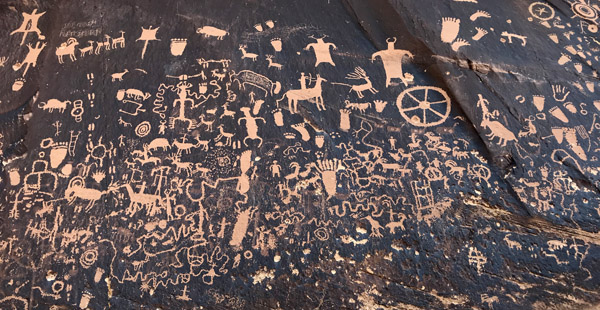