After a six-hour bus ride from Tayrona National Park that included riding on a flat tire for miles, we arrived in Cartagena.  The town offered intriguing history as a primary strategic Colombian location for centuries.  It was filled with pretty painted homes, huge ornate wooden doors with metalwork, and a vibrant street scene plus nightlife.  Since the city was so popular with tourists and there had been a large influx of Venezuelan refugees, gringos such as us were constantly approached by people selling drinks, selfie sticks, tours, sunglasses, whatever.  We quickly got the “ignore or wave away” movements well practiced to ward them off. 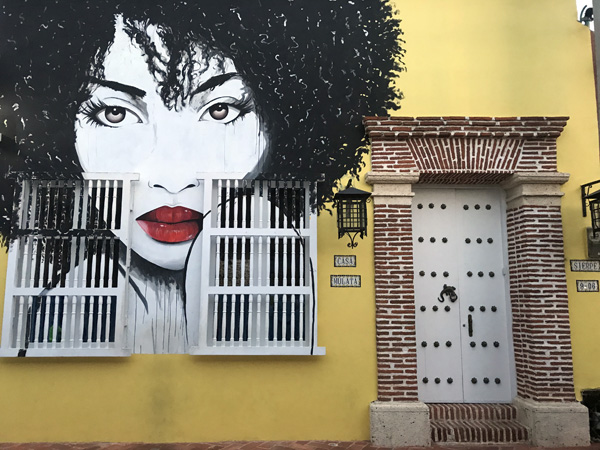 One of Barrio Getsemani’s many artful murals 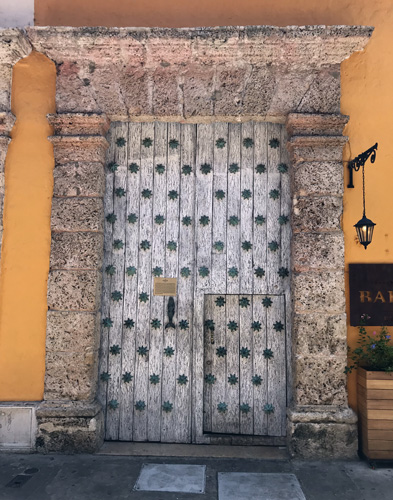 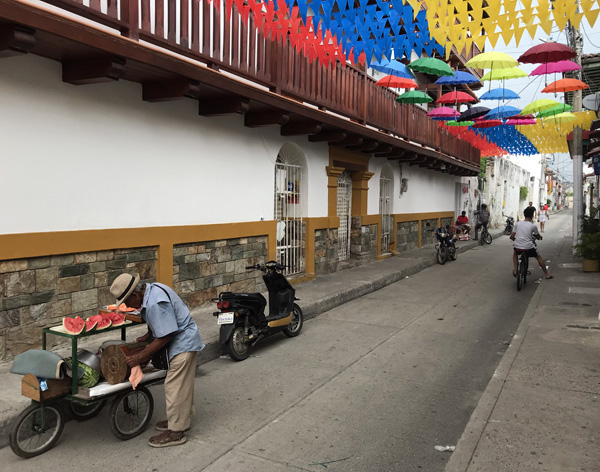 Colorful banners and umbrellas over watermelon street vendor in Cartagena

Nonetheless, Cartagena had much to offer in its historic plazas, churches, and historic structures.  The Old Town area of Ciudad Amurallada (Walled City) was surrounded by a massive constructed wall.  Castillo de San Felipe de Barajas loomed above the city on a hill, with impressive engineering of removable bridges, underground tunnels (that can now still be walked through), strategic cannon placement, and an “impregnable” design. 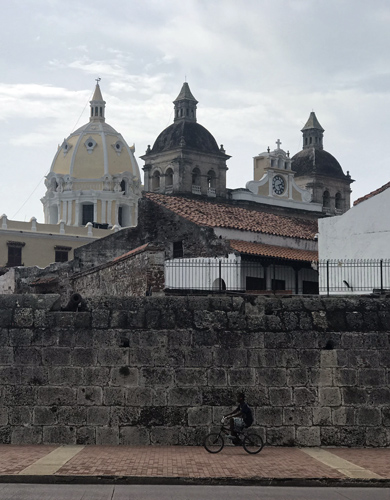 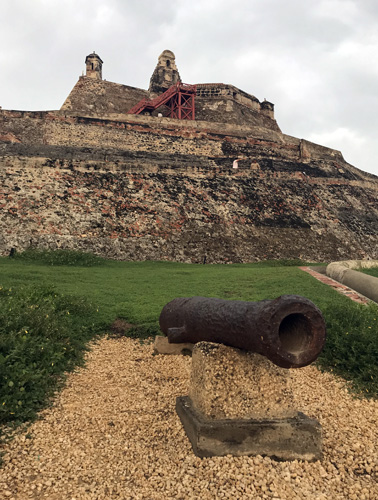 We also hopped on a high-speed boat to take us out to Playa Blanca on Isla Baru.  The beach was lined with jammed together, slapped together shacks built right up to the water’s edge, all filled with hostels, restaurants, bars, tours, hangout shade spots, and other services.

Nearby, the National Aviary was quite impressive.  Multiple ecosystems were represented via a vast diversity of exotic birds, all of which we could directly walk among and some even actively approached us.  Some birds were in large mesh enclosures with double entry and exit doors for us to get in and out while helping to ensure the birds stayed in.  Many other birds were out in the open air yet must have stayed there for the food.  An exotic bird show topped it all off.  We only saw two other visitors while there for three hours!  Definitely a hidden gem. 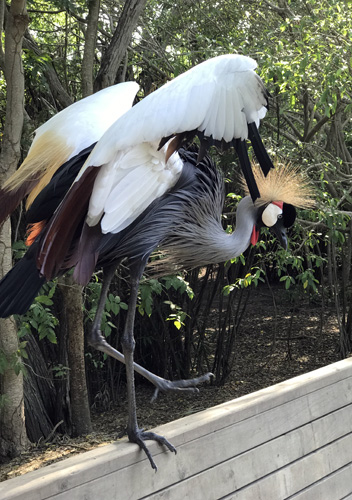 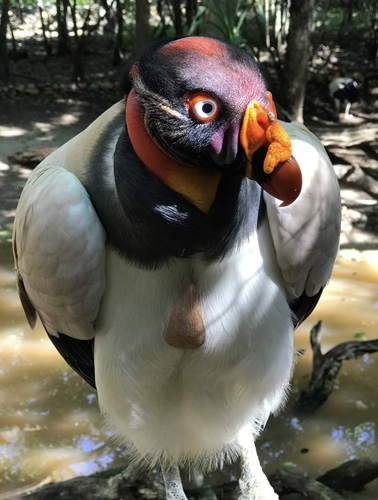 We remained at Playa Blanca into the night so that we could swim among bioluminescent plankton.  Small open boats took patrons out to a secluded mangrove cove where the nutrient rich environment created such an unusually high density of plankton that the movement of swimming through the water created swirling clouds of glowing water around us in response.  Our guides provided an introductory educational session on how the biology all worked, first in Spanish and then again in English.

We learned how chaotic and unsafe some of these pop-up outfits could be: while travelling at a fast speed in the darkness with no lights on, another boat slammed into the aft corner of our then stationary boat.  Our open top boat had just been bobbing in the dark water, occupied by the captain and about 16 passengers.  The other boat driver was clueless, and never even slowed down until after bouncing very hard off our boat. Neither boat had proper running lights, even though we also would later be travelling at high speed across open dark water to get to and from the plankton rich mangrove areas.  Amazingly, neither boat was seriously damaged or sunk.

Fortuitously, the other full speed boat was not 5 feet to its left, since there it could have seriously injured or killed a passenger on that side.  Six of the passengers immediately mutinied and demanded to be returned to the safety of shore, which was eventually done after much yelling and arguing back and forth in Spanish.  One woman was so scared that she was crying.

Nonetheless, some of us others stayed on to experience the glowing plankton.  It was fun to create an “aurora borealis” around our moving bodies in the water, and watch individual plankton make our forearms glitter with glowing specks when rising our arms out of the water.  It was a fun and eventful nightcap for a terrifically varied and exciting trip to Colombia!