Cloud Mountain Retreat Center is a non-sectarian Buddhist meditation getaway located in rural Washington between Seattle and Portland. The center encompasses 15 forested acres and extends its walking meditation into surrounding state owned lands plus a hike onto land owned by a collaborative neighbor. There are many different styles and levels of retreats available, all supported by a small permanent staff plus invited teachers. Participants come from all over.

The grounds are very peaceful and quiet, providing a terrific match for the center’s intent. Dirt paths meander through the forest, connecting the main lodge, meditation hall, and various styles of lodging. Exploring around yields small but interesting finds: a reflection pond, shrines with offerings, semi-formal gardens, forest vistas, observant wildlife, covered bridge over a running stream, and more.

This particular silent meditation retreat was focused on relaxing the mind and learning basic Buddhist meditation principles, as a personal follow-up to my earlier silent meditation retreat (non-Buddhist) where I focused more on general relaxation and life priorities. I found this one more challenging since I like to relax but think ahead, while “active thinking” effectively is not encouraged in a Buddhist meditation context. It is instead about not thinking and not planning, and instead just being nothing more than present.

Silent retreats are unusual for most people. After initial introductions, communal dinner, and instructions, everyone shuts off their mobile phones and is not supposed to speak at all for the next few days (except the instructor speaks). Communication and questions to the instructor can be written on paper and left in a box. Not speaking is surprisingly freeing. There are no “pressures” to be sociable, think outwardly, or think about what other people think. Instead, participants are given shared permission to ignore everyone else and just move inward in a simple way.

Meals are silent, which some people have difficulty with. Sitting across the table from someone for a half hour and not being able to talk is foreign to most. Even passing by others on a path is more of a heads-down experience than an acknowledgement of the other person.

This retreat was a bit less formal than most Buddhist silent meditation retreats. In the instructor’s words, she wanted everyone to feel comfortable and not be bound by the “rules” that more advanced retreats generally assume. That was a good thing. She would provide class sessions throughout the day at pre-scheduled times, with every session preceded by the sound of a loud gong-like bell reverberating through the forest. Some sessions focused on concepts and how-to, while others were more oriented to application of the practice.

Time between sessions in the meditation hall were open-ended for all students. Participants scattered, depending upon interest and what moved them. Some went back to their rooms, though journaling was not encouraged. Others stayed in the meditation hall, while most went for walking meditations through the forested trails and gardens.

At the end of the retreat, a closing ceremony occurred and participants were gradually brought back into their more normal pace and interaction with life. The instructor said that some people even need time for re-adjusting to the relatively faster pace of driving and talking. Otherwise the outside regular world can briefly be disorienting or overwhelming to them.

A Buddhist silent meditation retreat is both relaxing and challenging, if done right and depending upon your personality. It is a unique experience that most people never come close to experiencing since it is so far removed from rat race culture. 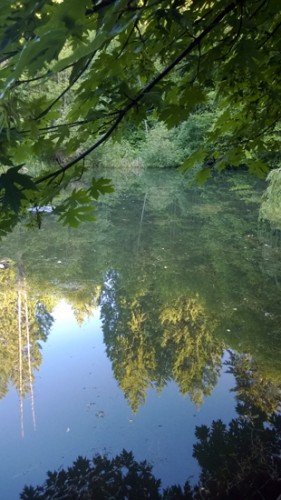 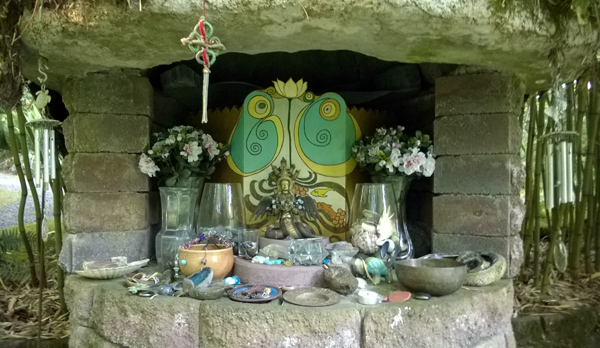 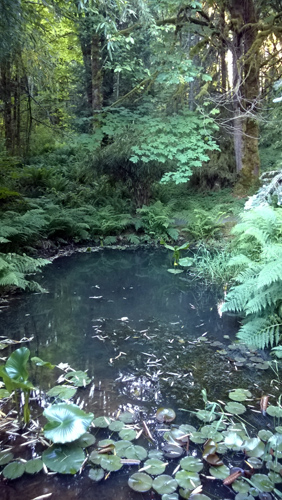 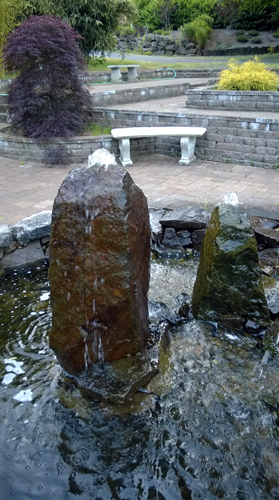 Fountains among the gardens 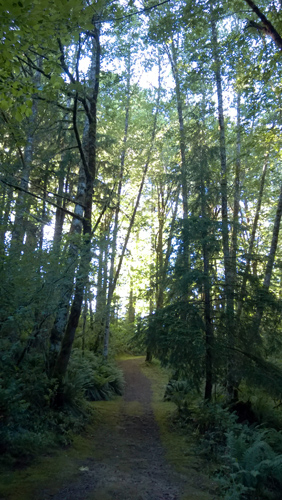 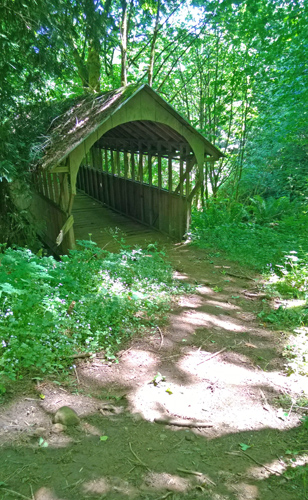 Hiking to a privately owned covered bridge over a stream