Theme Camps And Stuff To Do At Burning Man

There is so much going on at Burning Man. We were there for over a week, and probably only participated in about 1/10 of what it had to offer. The city is filled with nooks and crannies, hidden entrances, one-off performances that you stumble upon, and surprises everywhere. Some things are posted in a “What Where When” pamphlet, but most – and the best – experiences are had by just wandering around and letting things happen to you. 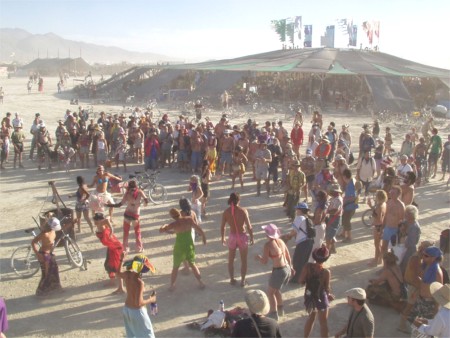 Drum circle dancing before an earthy ceremonial fire lighting ceremony; the fire was lit by only the Sun’s heat 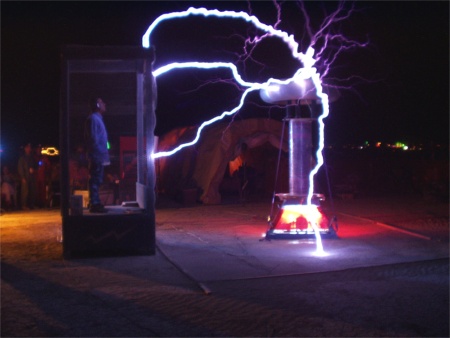 Dr. Megavolt lights up the playa with his mammoth Tesla coil, allowing anyone to stand in a special wire cage (left) while the electrical arcs danced around you 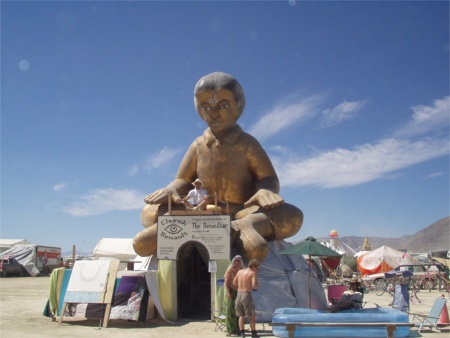 Scott sitting upon the altar, about to be “hugged” by the deity above on the Renaultar where virgins (first time Burners) are sacrificed; as a virgin, I was also spanked and had to sit on a toilet while ringing a bell upon entering Burning Man 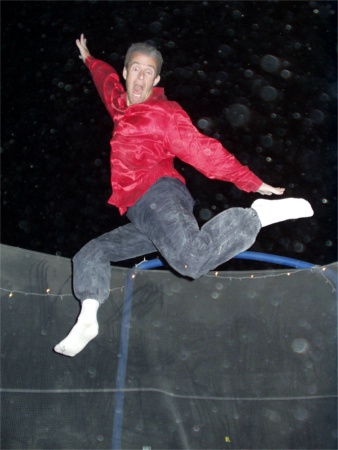 Scott bouncing around on a night trampoline 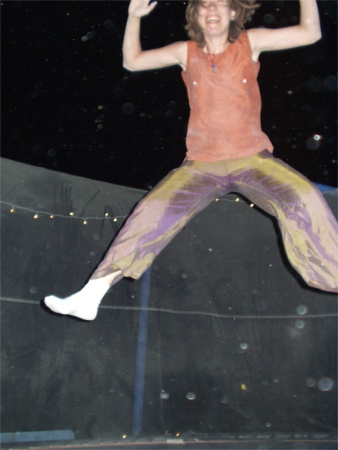 And Karen bouncing high, too! 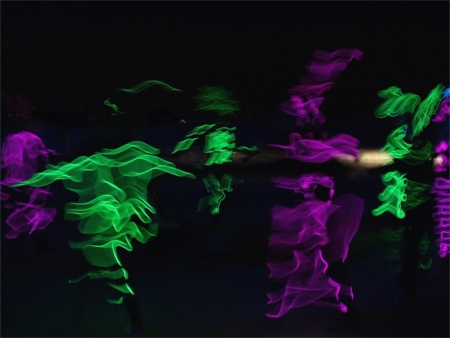 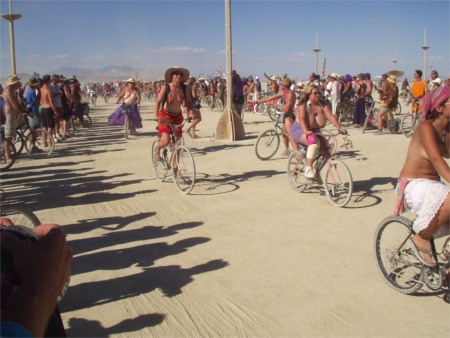 The Critical Tits bike ride, where thousands of women go topless and ride around the playa on their bikes, with a big booby party that follows 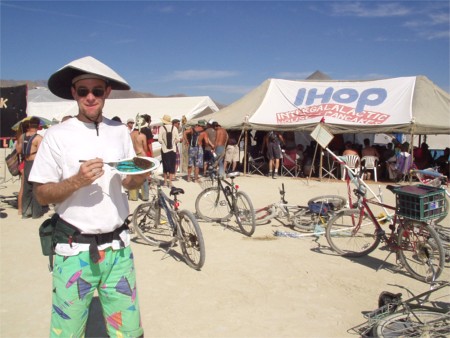 The Intergalactic House of Pancakes served thousands of pancakes every morning to all comers; their flavorings included M&Ms, watermelon, peach, blueberries, and other yummies, and they were colored in many day-glo hues 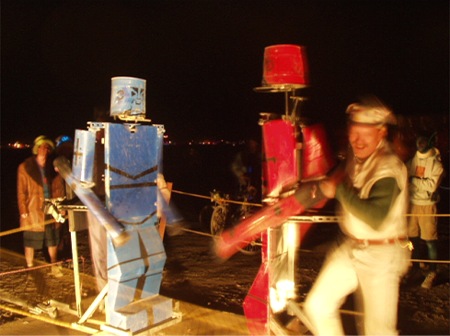 This guy just got his block knocked off in a life size Rock ‘Em Sock ‘Em game: one person per team swung the boxer’s arms while the other person stood outside the ring and moved the entire robot/swinger platform back and forth on wheels 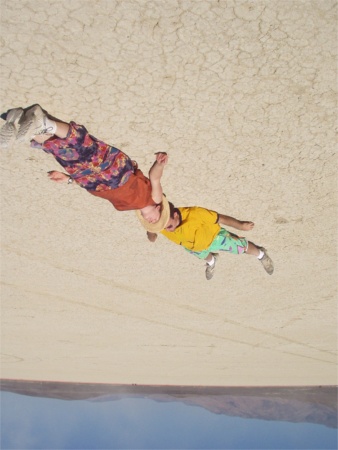 Freefall from the playa 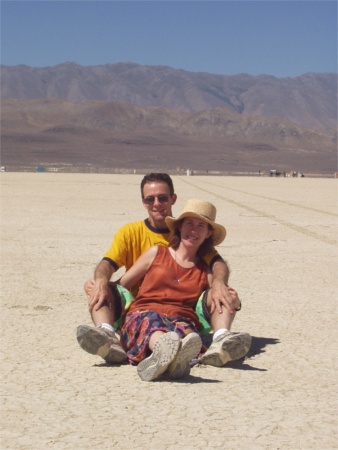 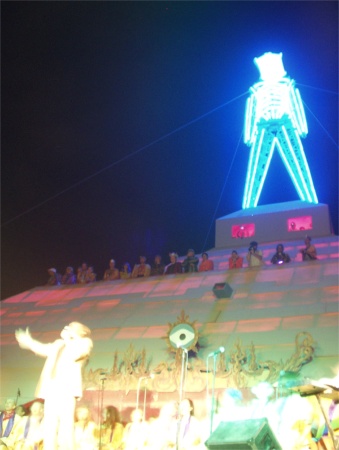 Reverend Billy and the Stop Shopping Gospel Choir proselytized in grand style about the sinful dangers of consumerism, war, and Bush politics 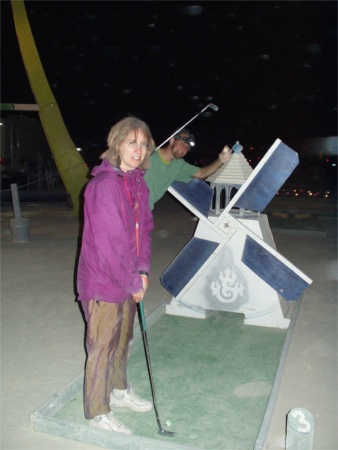 Lining up for a hole on the playa mini golf course 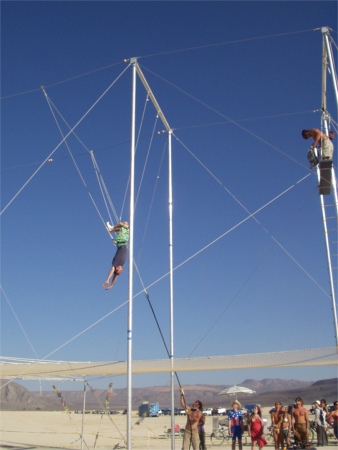 Scott hanging upside down and swinging from a trapeze 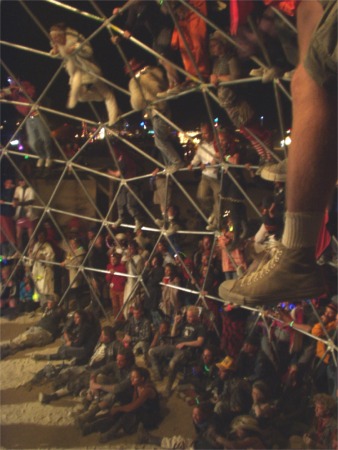 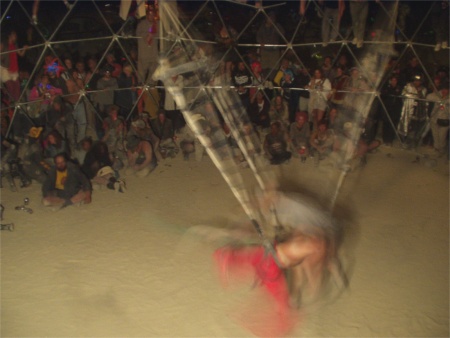 Two blurred people whopping on each other with padded bats, while suspended and swinging from bungee harnesses in the Thunderdome 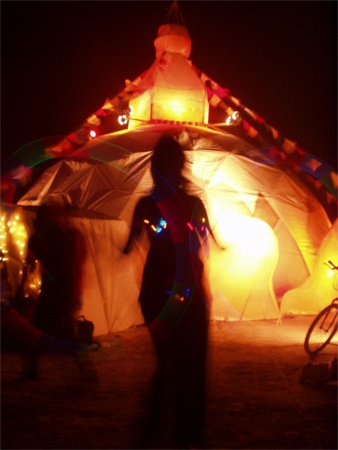