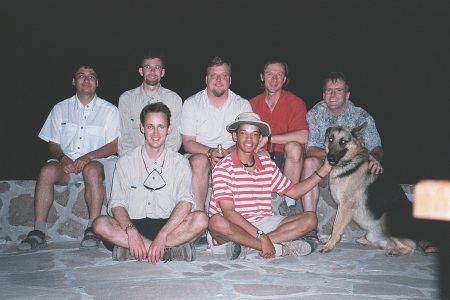 The Baja Mexico Double Aught Race gang. Back row: Josh, Scott, Steve, Jim, and Dan. Front row: Ken and Ancel, with random Mexican photo mascot. The Double Aught treasure hunt race was a long time in the making, masterminded by Jim and Steve over many months of plotting courses, finding unusual places, creating riddles and clues, writing software for our GPS-enabled portable computers to guide us through the race, and enduring margaritas under palapas by the beaches. It was quite the unusual – and fun – experience. (Punta Colorada, Baja, Mexico) 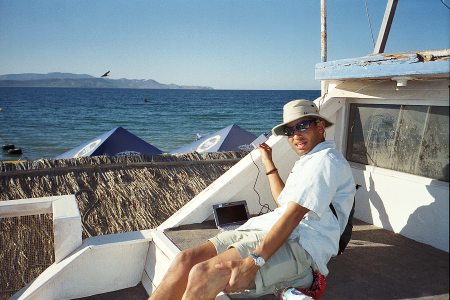 After Ancel and I successfully whooped the competition on the sprint from the airport to the first checkpoint at Playa Tecolote, we were a little concerned about our battery supply since there was more to come that day and we didn’t know how far into the evening it would all go. We snuck around until we found a hidden electrical outlet on the top of this large beached boat that had been converted into a beachside bar. The others never knew, just thinking that we were plotting or watching the view or whatever. This place was the first of many places where strangers would come to our group asking who we were and what we were doing: the computers and GPSes and frantic running around looking for answers to riddles caused a lot of interest at these otherwise laid back bars! The most frequent questions: were we with some kind of expedition, or were we a film crew? 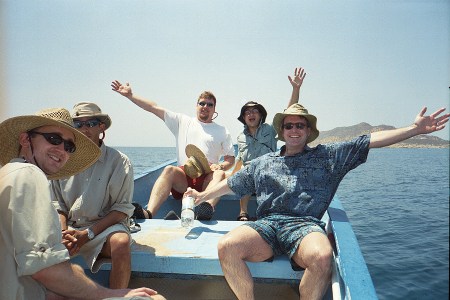 Ken, Ancel, Steve, Josh, and Dan on the way across the bay to a mostly non-race day of snorkeling among the reefs and fanciful fish of Cabo Pulmo. Lots to see and explore among the underwater formations. On the way back, we happened upon an unusual phenomenon: from the boat, we noticed a disturbance on the surface of the water. We approached and found a couple hundred large manta rays forming a cyclone of themselves as they raced around and around in a large cylinder that went from the surface all the way to the bottom 60 feet below. We got into the water and became enveloped by a swirling mass of manta rays that darted up, over, and around us from all directions. Magical stuff. 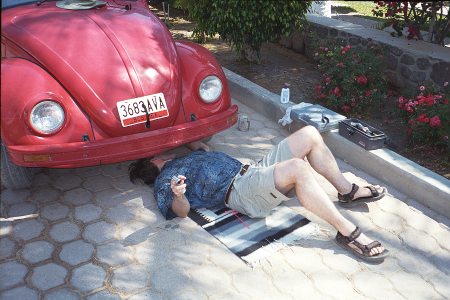 Dan, aka Mr. Fix-It, is here working on the suspension of our Bug at Punta Colorado. The day before, we had a drag-race start at the beginning of a long, rutted, bumpy dirt road. We beat so much of the crap out of our little Bugs that the suspension came off this Bug and the distributor cap came off the other one! I got pulled over by the police on the first day in La Paz in a different Bug. I thought for sure that I was going to be fined for going through town well above the speed limit, but the problem turned out to be that the car’s license plates had long expired and they let me go with a warning after a lot of slow two-way Americanized Spanish speaking. Gotta love what you get from Mexican style rental car companies… At least they traded us the other one for this “new” one… 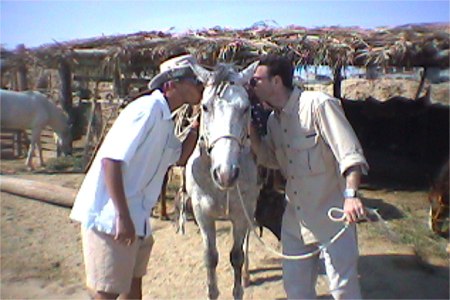 Ancel and Scott kissing a horse. Why, you might ask? As part of the race, we could get extra points if we got a digital picture of us kissing the mayor of San Jose del Cabo. He was spared us American freaks, though, because the offices at town hall had already closed before we got there. So, we later went searching for an alternative “mare” and found one in Cabo San Lucas. 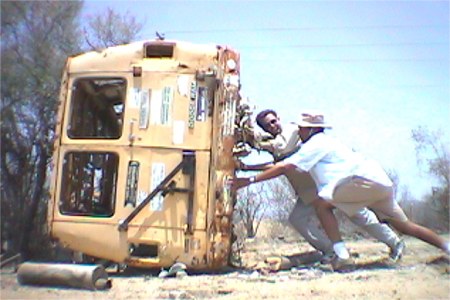 Random acts of kindness and violence in the desert. Scott and Ancel practicing for upcoming trial competitions of the revered but little known sport of vanrolling. (near Santiago) 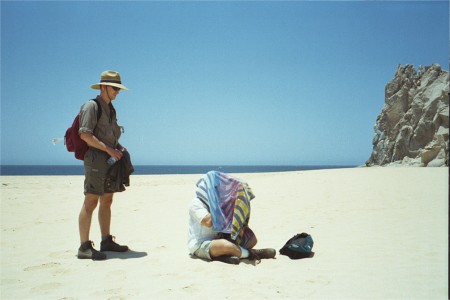 There were some funky things about using high tech toys in low tech Mexico. Here, Josh has to cover his head with a towel just to see the computer screen that shows our route up into the hills above Playa del Amor near Cabo san Lucas. To get here, we had to race our cars to a particular dock area that we located by GPS, find a boat to charter, and guide the boat driver to a specific patch of beach where the GPS would then trigger the software and give us the next set of clues, all while the timer kept ticking! 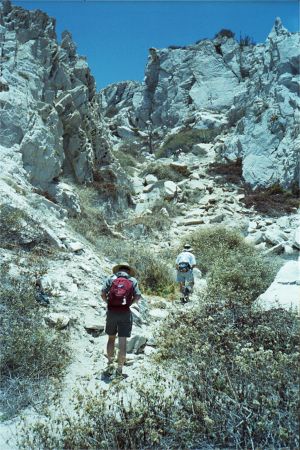 Ken, Josh, and Ancel, as we start our trek into the hills above Playa del Amor looking for clues that are hidden in rocks up top. The race took us everywhere from abandoned smelters, burned-out hotels, unnamed 4 wheel drive roads, and places like this. For good measure, the occasional beautiful vista and fancy hotel would be thrown in, too… 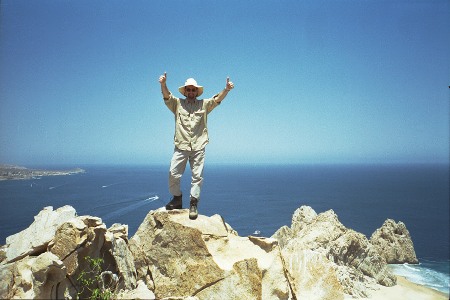 Clues found and checking out the views! Playa del Amor to the right, Pacific Ocean in the distance, and Cabo San Lucas off-pic to the left. Very pretty stuff. 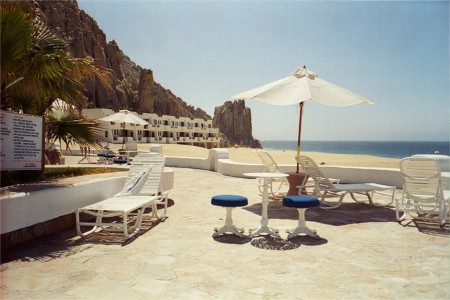 View from the Hotel Solmar pool and bar area, looking out onto the beach (Playa Solmar) and rock formations. The rooms ahead are built into the rock face and actually have rock protruding into the rooms. Our rooms were on the beach behind where this photo was taken. After a good day of run-around racing, this was a nice place to hang out and then launch into the infamous nightlife of Cabo San Lucas. 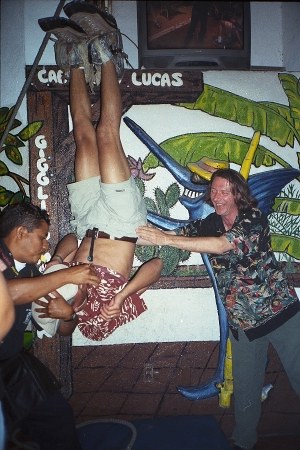 At the famous Giggling Marlin in Cabo San Lucas. Ancel is being hung upside down by his ankles as the bartender forces a shot down his upside down throat. Jim’s there for moral support and to prevent any accidental head crackings. The Giggling Marlin is a fun place, but watch out for the funky drinks that the bar tries to sucker unsuspecting tourists into buying. The pseudo-dirty dancing show with the emcee is kinda funky, too. Good for “subtly” getting the appropriate college crowd hormones started… 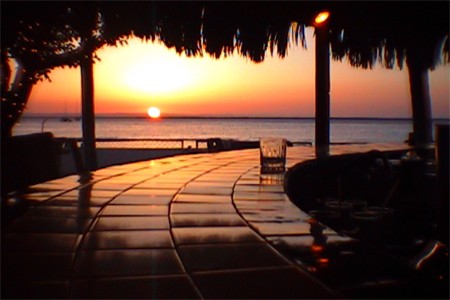 Parting shot from the bar at the Hotel La Posada Englebert (it’s owned by Englebert Humperdink), on our last evening in Baja, photo courtesy of Ancel’s computer. An interesting set of characters wander through the La Paz hotel, including the friendly on site ex-German manager and his ex-French wife who used to do the Las Vegas circuit. Jim knows all of them from years of accumulated adventures in the area. The final drinks were just as good as the first, except that they were unfortunately the final drinks of a unique trip and fun treasure hunt through the interesting experiences that Baja has to offer.